Unvalidated Pain: A Chaplain's Journey to Iraq and Back 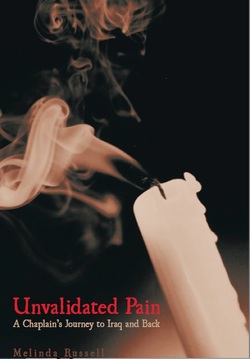 Report after report has come out about the suicide statistics in the military since the War on Terrorism began in 2001.  But numbers don't tell the story.  There is no one reason for the high number of suicides in the military, and there is certainly no one solution.  Yet, it is only in opening ourselves up to the pain that we can learn and try to prevent another tragedy.  Unvalidated Pain details the loss of a chaplain's assistant and how his suicide effected a newly commissioned chaplain.

From the Back Cover:

Iraq, fall 2007. The surge was in full swing. The tours were increased to 15 months. IED’s had become a daily occurrence. But she was a chaplain in an Aviation Brigade, going to a large, safe COB. There wouldn’t be dangerous convoys. There wouldn’t be mortars shaking everyone from their beds in the middle of the night. Except for the long time away from family and home, it would be an easy tour. Until June 2, 2008, when the Chaplain’s world was turned upside down.

You know the pain of military suicides through statistics. Now, share that pain through the eyes of a Chaplain who lost her assistant 10 months into a 15 month tour in Iraq. His pain may have ended that fateful summer morning, but nothing will ever be the same for those who experience Unvalidated Pain.